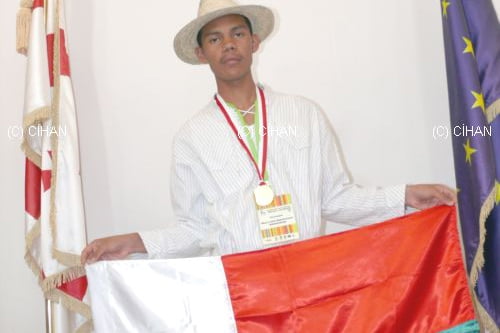 Madagascar joined the olympiads for the first time in 2005, but had never won any medal. Students from 40 different countries competed in various categories such as Biology, Chemistry, Physics, Engineering, Information Technologies, Math etc. at this competition. Rakotoarison made a project proving that different inequalities can be solved with the same equation.

Talgat Amanov, the coach of the olympiad team said that his students were trained by their math teacher Ozhan Akdag. In his account to Cihan, he said that he graduated from a Turkish school in Kirgisyztan, then came to Madagascar, and that this was another thing that made him proud.

Rakotoarison who will be graduating this year from the Turkish school that opened in 2002 in Madagascar – the world’s fourth largest island country – will continue her education in Germany. 800 students receive education in three Turkish schools in Madagascar. The school also has a bronze medal from the poetry category of the International Turkish Language Olympiads. Five students will go to America while two will go to Germany from the Turkish school to continue their education. Fourteen of the graduates are continuing their education at the varoius universities in Turkey. The school will have its third graduation this year. (CIHAN NEWS AGENCY)

Source: Star newspaper, May 21, 2011, Original story is in Turkish and it was translated into English by IDC members.