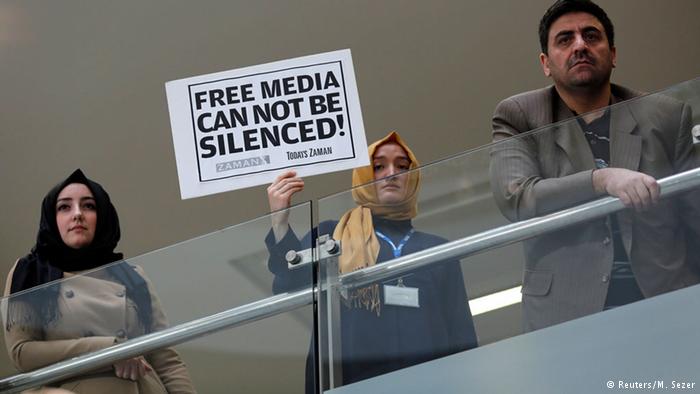 Those police officers who carried out the operation are so incompetent… They helped the perception that “Fuat Avni” [a deep throat within the government who is disclosing the government-planned unlawful operations prior to them being put into action] knows everything that even [Deputy Prime Minister] Bülent Arınç does not know to be imprinted on people’s minds and helped many people to ask, “What is the Cemaat’s main offense?”

No search. No raid. But they [police officers] entered the Zaman and STV buildings as if they stormed these places. So they made it appear as if “newspapers and TV stations are being raided by police in Turkey.”

They [police officers] went to the media groups’ buildings to detain [Zaman Editor-in-Chief] Ekrem Dumanlı and [Samanyolu Media Group Chief] Hidayet Karaca, who would have actually gone [to the İstanbul Police Department] to testify had they been called upon to do so.

The background of the operation into the Cemaat which they [the government] have tried to depict as the main source of all evil in the world is so groundless and weak that… Everyone asked the question: “What is the worst offense that the Cemaat, who you demonized for months, committed?”

The operation came just before the anniversary of the Dec. 17 corruption investigation and aimed to change the [country’s] agenda, but [the government] failed [in this]. Because this operation only served to put the Dec. 17 [graft investigation] back on people’s minds.

Fuat Avni, whoever he is, turned out to be right again. A police operation that he caused to be delayed for several days was finally conducted. Now he is “heralding” a new wave that will be carried out against the mainstream media.

Of course I am angry with the operations into the Cemaat media organizations; we already know the reason for it. Rest assured that I can never understand those leftists who are cheering because their “enemies” are being targeted unlawfully. How primitive of a way to say “It serves you right!” It is correct that they failed to react to the operations which were launched against Kemalist journalists in the past.

But still, I cannot understand those who are delighted with these operations. How can it be that they are unable to comprehend the fact that their turn will also come? They should immediately go to a psychologist if they are deluding themselves that the operations are seeking “justice.”

So the [opposition Republican People’s Party] CHP’s stance [against the detentions] is totally appropriate. Because no matter what types of mistakes the members of the Cemaat committed in the past, none of them justify this anti-democratic treatment against them. No social democrat can build his or her policies on hate and blood.

Thieves of democracy and freedom!

Bad news came while I was heading for Tbilisi on Sunday: The Dec. 14 operation!

I called Ekrem Dumanlı. He was about to be detained. We had a heart-to-heart talk. I then started to do the only thing that I was able to do: post tweets protesting the incident.

When I returned İstanbul, I visited my colleagues at the Zaman building and told them about the military coup of Sept. 12 [1980], and stated that I have no doubt that their struggle for freedom will make theirs a better newspaper. They listened to me in silence. I reminded them that they are in a luckier situation than us since they continue to publish their newspaper, unlike what happened in our case.

If the element of hatred is detectable at first sight, the European Court of Human Rights defines such language as abuse of freedom of expression. In this regard, some of the language used by Prime Minister Erdoğan to describe the Gülen movement – i.e. “perverts”, “hashashins”, “traitors”, “spies”, “worse than Shiites”, “leeches” and “a terrorist organization” – do indeed constitute prima facie hate speech.