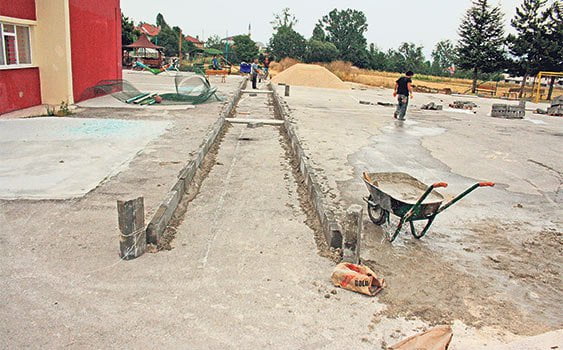 The Bolu Municipality, Turkey, having previously closed down two schools belonging to businesspeople affiliated with the faith-based Hizmet movement in early July, has now constructed a road inside the garden of Fatih College, a high school, despite the fact that the school is surrounded by empty plots of land and no residential area exists around the school.Local residents, angered by the municipality’s arbitrary decision to construct an unnecessary road inside the college’s garden, called on the municipality to abandon the unreasonable decision and to spend tax-payers’ money on more appropriate projects. The municipality hung a sign in front of the sealed schools in July claiming that the buildings were not licensed and did not follow municipality-approved plans. Bolu Mayor Alaaddin Yılmaz argued that his municipality had to take action against unlicensed buildings and that the closures were not linked to a government policy against the Hizmet movement. However, the municipality’s latest move of constructing a road that no residents will able to use due to its location in the college’s garden has contradicted Yılmaz’s former statements, which claimed that there was no intimidation campaign against Hizmet-affiliated schools and institutions. When reporters, speaking on the decision to shut down the schools, asked whether the municipality’s decisions against the schools had any link to the government’s ongoing campaign against the Hizmet movement, the mayor said, “It would be wrong to perceive our decisions as a step against the Hizmet community.”  The closed schools are close to the Hizmet movement, which is inspired by Turkish Islamic scholar Fethullah Gülen. Prime Minister Recep Tayyip Erdoğan has accused the Hizmet movement of being behind a massive corruption investigation that implicated members of his family, inner circle and four then-Cabinet ministers. He claims that the investigation was an attempt to overthrow his Justice and Development Party (AK Party) government, although the prime minister has not been able to produce any evidence to justify his claims. The municipality’s construction equipment first demolished the wall around the school and then started to construct a road in the middle of its garden. Without having informed the school authorities about the planned construction, the municipal workers also cut down the school’s basketball hoops, causing astonishment among the school’s management and staff as well as local people, who are not in need of such a road inside the school’s garden. In May, the prime minister publicly advised AK Party supporters not to send their children to schools affiliated with the Hizmet movement. “We will not even give water to them [Hizmet members],” he vowed. More recently, the prime minister ordered officials at AK Party-run municipalities to seize land and buildings belonging to the Hizmet movement by any means. The closure of two Hizmet-affiliated schools in Bolu in July followed similar moves in other parts of Turkey. In early June, the İstanbul Metropolitan Municipality stopped the construction of an education complex on privately owned land on the pretext that the land would be used as a green area and meeting point in the event of an earthquake. The municipality, however, failed to obtain the required approval from other authorities in the province to halt the construction of the education complex. They said the complex belonged to Fetih Eğitim İşletmeleri (Fetih Educational Operations), which has close ties to the Hizmet movement. On April 21 of this year, municipal police sent by the İstanbul Metropolitan Municipality blocked access to the building under construction, citing no justification. On June 6, the municipality took action to turn the land on which the education complex was being built into a green area and attempted to seize the land. For land to be turned into a green area, the municipality needs the approval of the İstanbul Waterworks Authority (İSKİ), the İstanbul Metropolitan Municipality Transportation Coordination Center (UKOME) and the Earthquake and Soil Inspection Directorate (DZİM). In the case of Fatih College, however, the municipality had not consulted with any of those institutions.Speaking with Today’s Zaman about the municipality’s odd initiative to construct a road inside the college’s garden, Hakan Çakır, a parent of a student attending the college, criticized the municipality, saying: “It is very saddening to witness such intimidation, as the school has no intention but to serve students and give them a good education. It is a tragicomic incident. The road ends inside the school’s garden, it is a dead-end road. I am sure that even the workers who are taking part in the construction of the road have not constructed something like this before.”The municipality, also in July, removed a sign advertising the Fem prep school in İstanbul’s Mecidiyeköy district, which helps students prepare for university entrance exams. The municipality claimed that the school had violated the municipality’s advertising regulations. The school, however, said the municipality had approved the advertisement, for which all taxes had already been paid. It also said the real reason behind the municipality’s decision was that Fem is affiliated with the Hizmet movement. The school filed a complaint against the municipality with the İstanbul Prosecutor’s Office, arguing that its advert had been removed for no apparent reason.